When the bloodied and ashen cop walked onto the train, the passengers screamed. 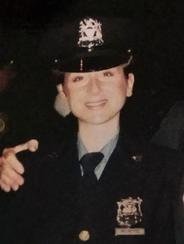 She had eight months on the job, a cop working her subterranean beat…under the city of New York. Very soon, in the darkness of a subway tunnel…she would come face to face with madness.

NYC Transit Cops worked basically alone, it was our “routine” patrol. So on Dec. 14, 1987 26-year-old Police Officer Christine McIntyre was alone aboard a Manhattan train that suddenly stopped in a subway tunnel.

The Motorman had spotted a man on the catwalk, a narrow walkway that runs along the walls of the tube. P.O. McIntyre was notified. To get the man out of harms way, she put herself in harms way and for her efforts…soon felt a blade at her throat. 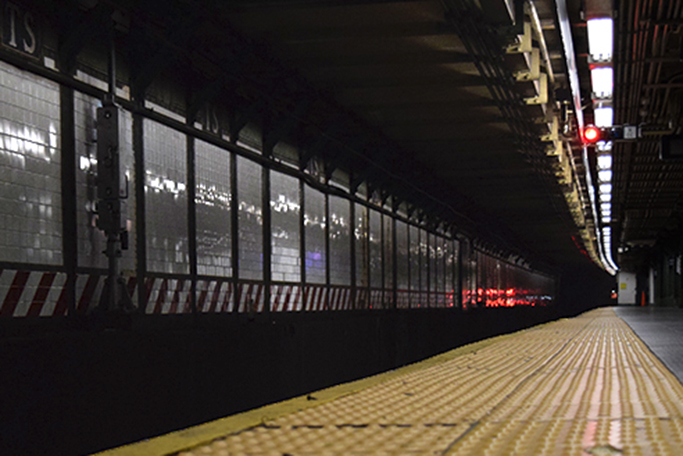 A NYC subway tunnel was a dark, electric, combat arena

Patrolling New York’s subways, by a dedicated subway patrol force, dates back to the thirties when uniformed officers were “Specials”. Later, with “Unification” the various Divisions, BMT, IRT and IND came under one Transportation Department and the force that would later become The NYC Transit Police was born. 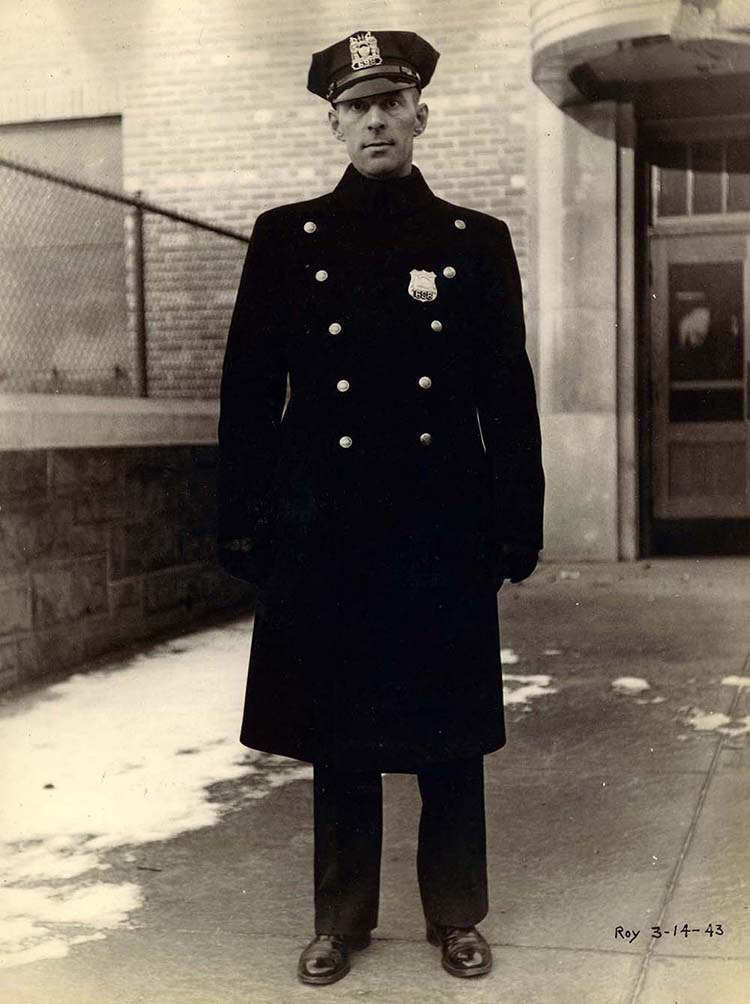 My dad, Ptl. Roy Winters at Bway ENY Sta A line. He patrolled 34 years…with no radio

My dad patrolled the subways from 1931 to 1965. I joined the Transit Police in 1966 and retired in 1992. The job merged with NYPD in 1995 and those who since patrol the subways do so as the NYPD’s Transit Bureau. The NYC Transit Police no longer exist…it says here.

Most of the years that I was a Transit Cop the force was about 3,000 to 4,000 or so strong, about one tenth the size of NYPD. We were a smaller force but we were tight. Today, cops who were “Transit” consider themselves Brother and Sister Transit Cops forever. 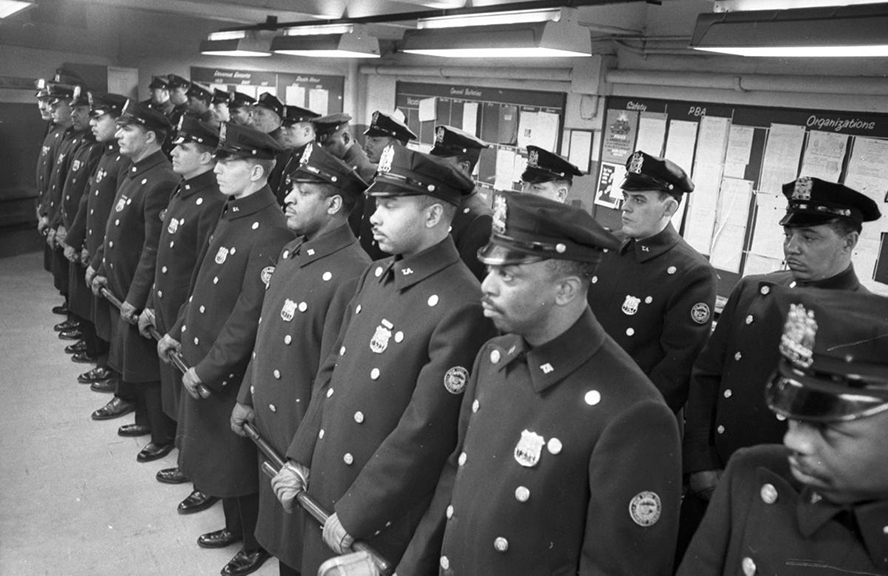 We were a unique force with very specific challenges. Our beat was the miles of platforms, stairways and rails that take riders to and from work every day. We breathed hot, humid air laced with the scent of steel dust and urine or sucked in the icy air on wind-swept els.

The train stopped in the tunnel and Officer Christine McIntyre attempted to call for back up on her radio but couldn’t connect. She was in a “dead spot”, a pattern of radio transmission problems that has persisted since subway radio communication was first instituted for Transit Cops in the sixties. But the job needed to be dealt with, so with heart much bigger than could possibly fit into her 5’3 120 lb frame, she stepped off into the darkness…alone. 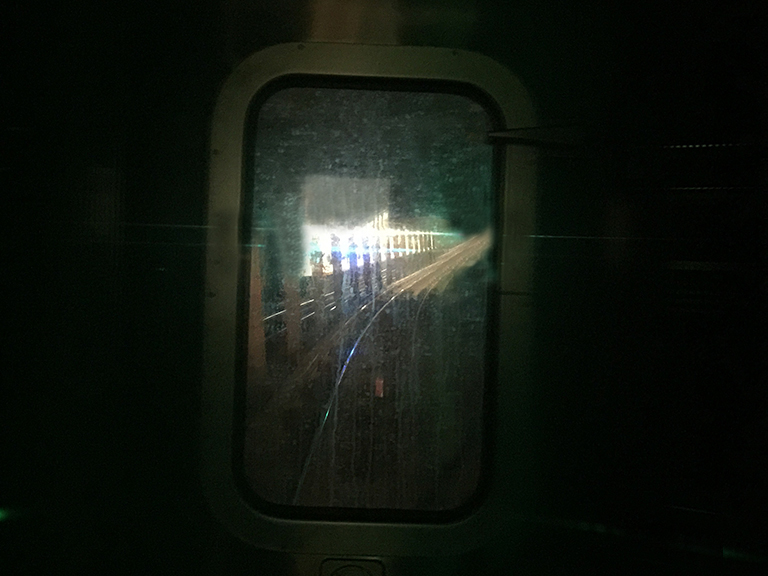 It was often the low-level offenders, fare beats, smokers and sleepers who would injure and sometimes even kill cops. One such death occurred at the very 59th St. Columbus Circle station Officer McIntyre was approaching:http://www.odmp.org/officer/7371-police-officer-joseph-keegan

So there really was no such thing as a “routine” collar. We did regularly arrest fare beats and pan handlers, perverts and pickpockets. But we also chased muggers down electrified tunnels and exchanged gunfire in tile-walled, ricochet insanity. We went under trains to rescue the fallen, the suicidal…or the shoved. Because of our unique, alone-and-up-close policing, we felt a strong kinship with each other. We were much fewer than NYPD but just as the “few” Marines have a Semper Fi Brotherhood, we also felt a bond as the Brothers and Sisters of the New York City Transit Police.

The conductor opened one door of the train so Officer McIntyre could access the catwalk. She first tried to offer assistance and she asked him to come into the train, but he refused. He was trespassing so she decided to place him under arrest. In the tight confines between the train and the tunnel’s wall she placed him against the train’s window to handcuff him. A misdemeanor collar at that point, no need to have a firearm out. But he whirled and with a handful of her hair, pulled her head back…slicing a blade through her neck muscles…even catching her carotid artery.

There are many Americans who feel strongly about service, whether in the military on foreign soil, or here at home in the big cities and small towns across America. But some, even within these groups, feel a need to serve those groups as well. 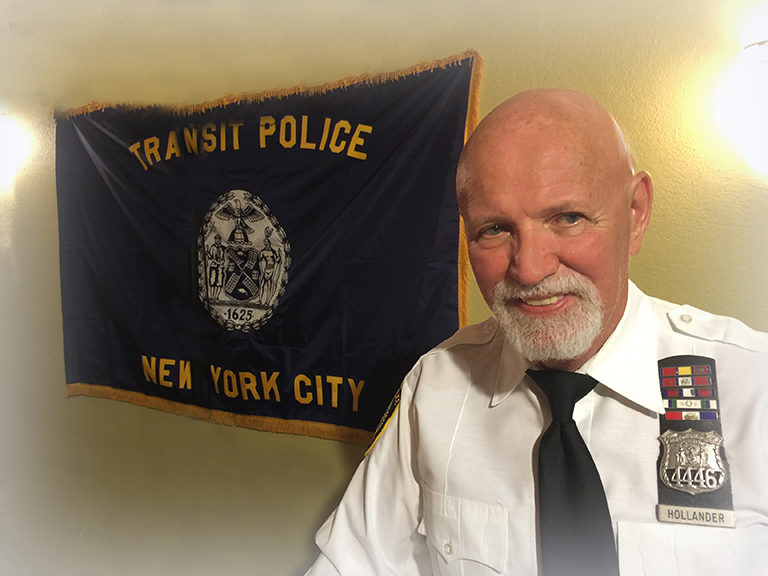 About two decades ago, retired Transit Cop, Lou Hollander started the annual Transit Police reunion, a long-weekend event in Florida. Some of us come from long distances, some live nearby, some come for a five day weekend, some shorter stays. Some come for the golf outing or gambling cruise or the Patty Townsend Memorial banquet. All come for the camaraderie. 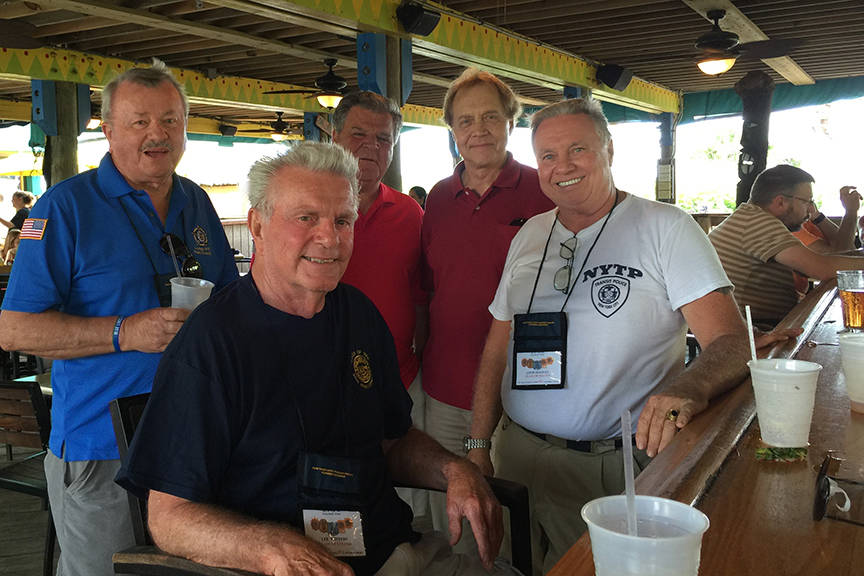 Libation is liberal and memories grow more vivid with the passing years…it seems. At this June of 2016 reunion held at Cocoa Beach’s International Palms hotel, 225 Brothers and Sisters gathered. And this was the smallest gathering yet. Some years there have been great “Transit” migrations of 400 from across the country. I’ve spoken with retirees of other departments, NYC Fire Dept., NYPD, etc. and none have reunions of this size and length. 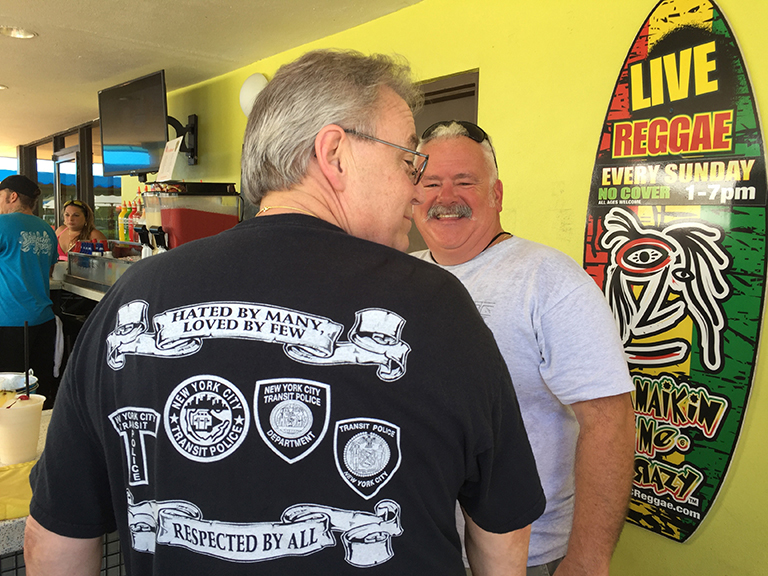 Cops find themselves in combat in a wide array of Theaters of Operations, from roadsides in rural counties to the rooftops of the Bronx. But Officer McIntyre’s dark combat zone was as slim as her chances for survival…a 19” wide catwalk. It was there that her adrenalin-fueled fight for life began.

Whether patrolling America’s highways, streets, high rises, or subways…cops find themselves targets in blue. In the line-of-duty cops get injured, cops get maimed…cops die. Law Officers are punched, kicked, bitten, stabbed, crashed into, run over, shot…and shoved to subway tracks. Often, otherwise ubiquitous and primed cell phones seem to fail in recording these attacks against cops.

In the fierce battle of the catwalk, Officer McIntyre raised her left arm to ward off the slashing knife while with her right hand she tried to access her 38 Ruger. But in the onslaught she couldn’t release the safety lock of her holster.

Release of a firearm from its holster’s safety lock works well in the calm and fluorescence of Firearms Training. But not always so well when darkness, assault, adrenaline, blood and close quarters…are all in concert. She did smash her attacker with her nightstick several times but this seemed to only enrage him. “He went crazy”, Christine said. ( A friend of mine on the job, related to me how he had to shoot a man who was beating him with a length of iron. After being shot the man “only became more enraged”, he told me. Such is real-life confrontation with madness.)

Christine’s nightstick soon went flying. He was once again trying to slice her neck. To keep from falling she grabbed onto a rusted, yellow pole that was on the tunnel wall. But the pole broke loose so she used it as a weapon. She was trying to keep him at a distance and possibly have the chance to get the gun out, she told me. But the pole broke in half and he used the broken length of it on her. Christine remained standing throughout it all, though her neck was sliced open, her left bicep ripped wide…but she finally got her gun out.

We are a dwindling legion, we Transit Cops. Natural deaths take some of us each year. They and the line-of-duty fallen are remembered on our online Transit Police and FOP sites. At each reunion the line-of duty deaths are observed in special honor. 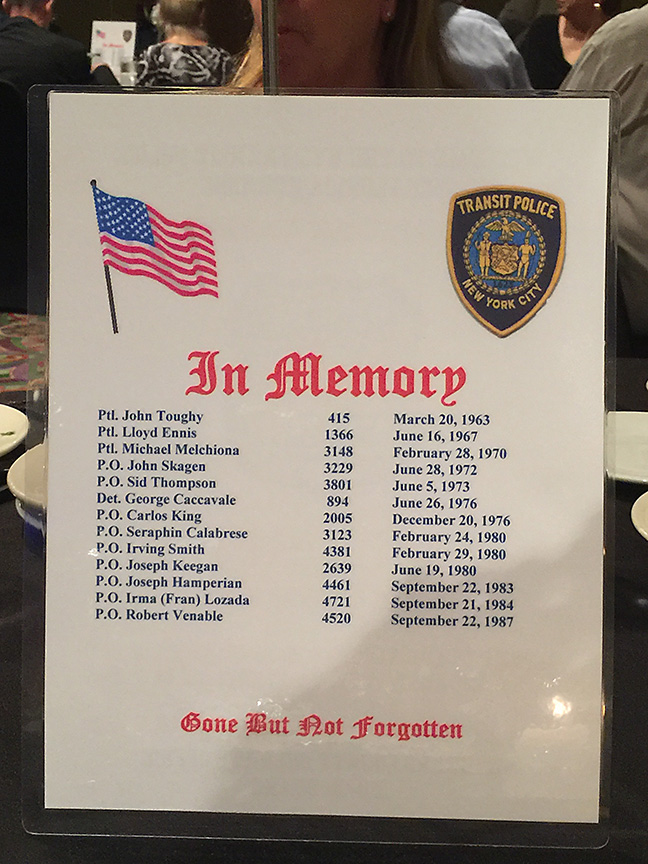 Line-of-duty deaths are honored on each banquet table

Officer McIntyre was looking at her attacker’s back. He was retreating. He walked along the catwalk toward the rear of the train. She followed him, bleeding badly, gun drawn. Now at that point, had it been me with a slit throat and gaping arm, I might have very well sat down and just waited for help. But not Officer McIntyre. Though blood flowed copiously, she followed her attacker until she saw him jump onto the track. But then numbness in her hands and feet sent a message to her cerebral cortex of impending death, so she walked back to the open door of the train.

Some members don’t do much traveling these days, so a long journey to Florida from the Northeast or the West is a challenge.  But, even under these circumstances…225 members managed to “Transit” their way to the annual reunion. 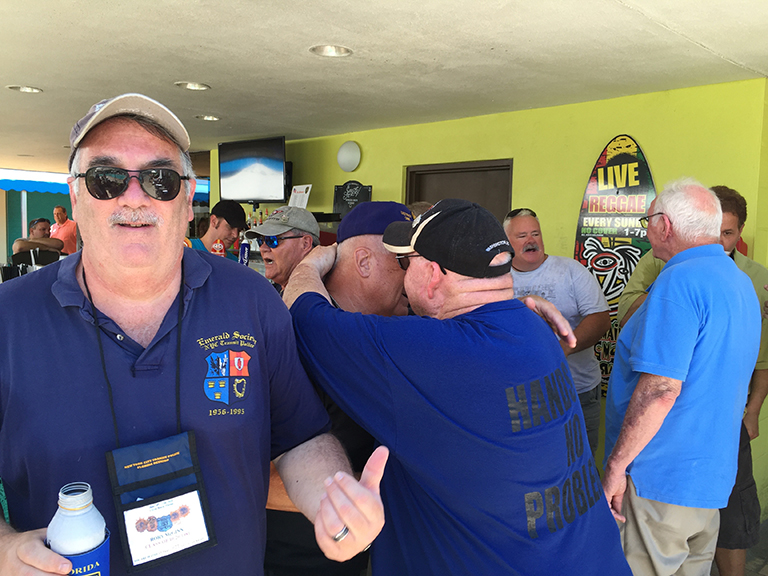 Retiree, Rory McGinn and a small part of the celebrants

Many attendees are from Police Academy classes of the sixties and seventies but it is hoped that more of the later classes of the eighties, and nineties, will provide a surge that will carry the celebration of our unique bond forward. 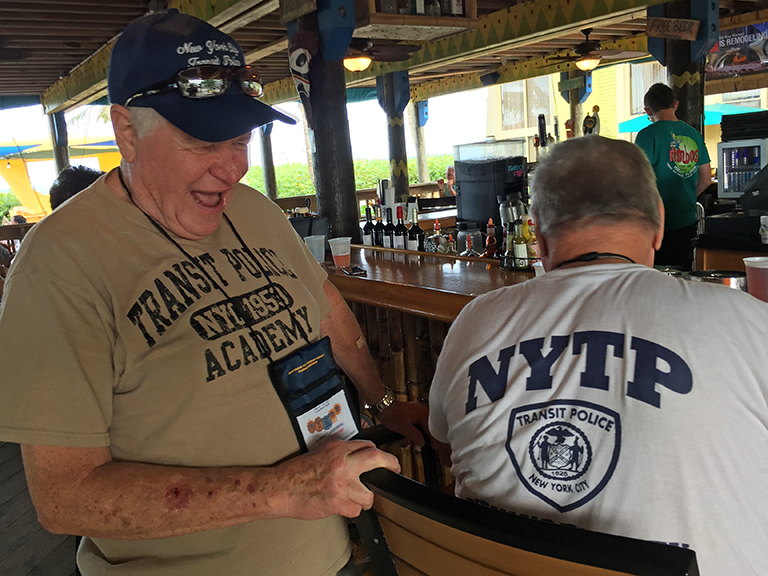 When the bloodied and ashen cop walked onto the train the passengers screamed. But three clear-headed airline employees were aboard. Two were a couple on a belated honeymoon, Dale and Teri Demetropolus of Pacific Northwest airlines, the third was Myrna Bonet. They shouted people off a bench seat and laid the cop upon it. One of them took off her scarf and used it to apply pressure to the fallen cop’s neck. 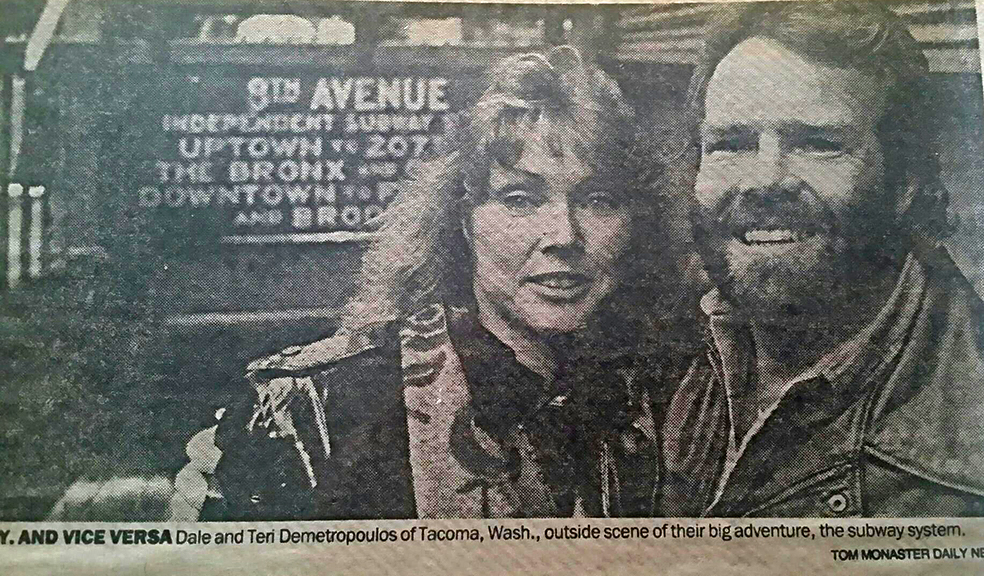 The train, still in the tunnel, wasn’t moving toward the next station, 59th St. But at the urging of all to the conductor, “Get this train moving!” it finally moved forward.

At the 59th St. station, Marine vet Transit Cop, Joe McGary rushed to the young cop sprawled and near death. He hoisted her in his arms and sprinted up three flights of stairs to the street and medical attention. 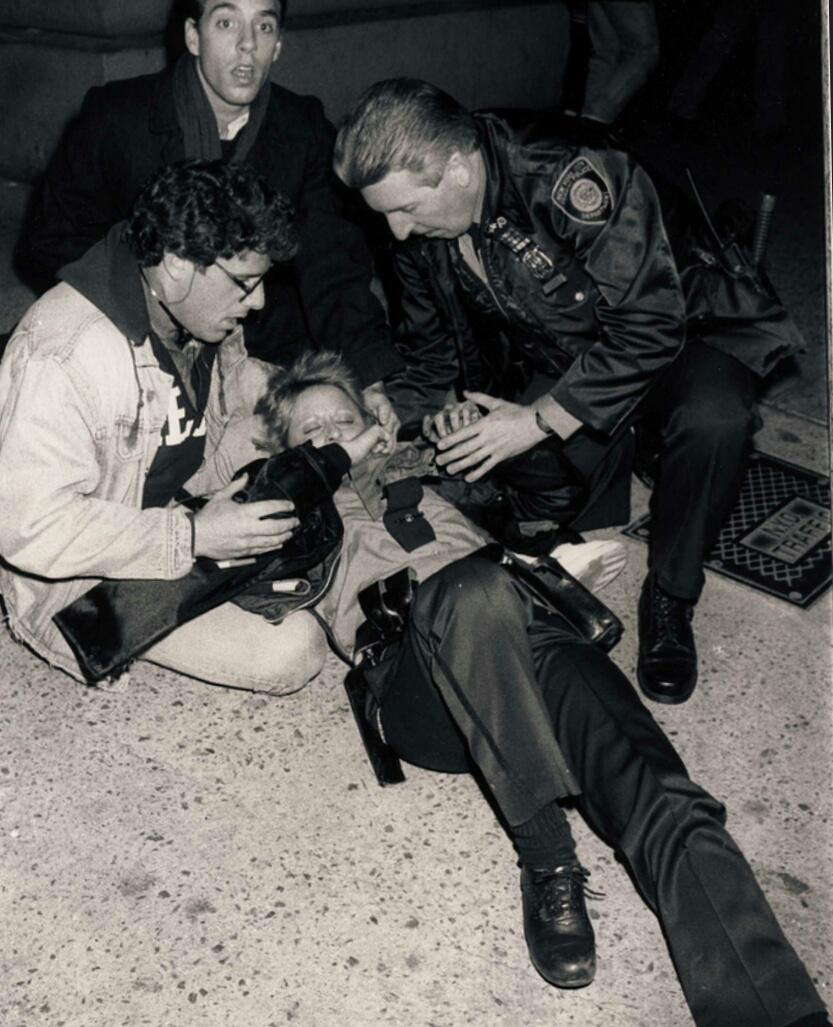 The attacker was eventually apprehended. He gave his name as “Jack Webb” and “Peter Son” and said he lived in the Empire State building. He had been arrested in CT for robbery but that state found him unfit to stand trial. He absconded from mental health commitment there and headed for NYC.

Officer McIntyre was taken to Bellevue Hospital where her mom later happened to be riding in an elevator with various officials. They did not know who she was when she heard them say, “It doesn’t look like she’s going to make it.” But she did make it. She survived madness in a subway tunnel and eventually, and very reluctantly, retired.

“Jack Webb” was found by New York’s criminal justice system to be unfit for trial and committed to a mental institution…once again. 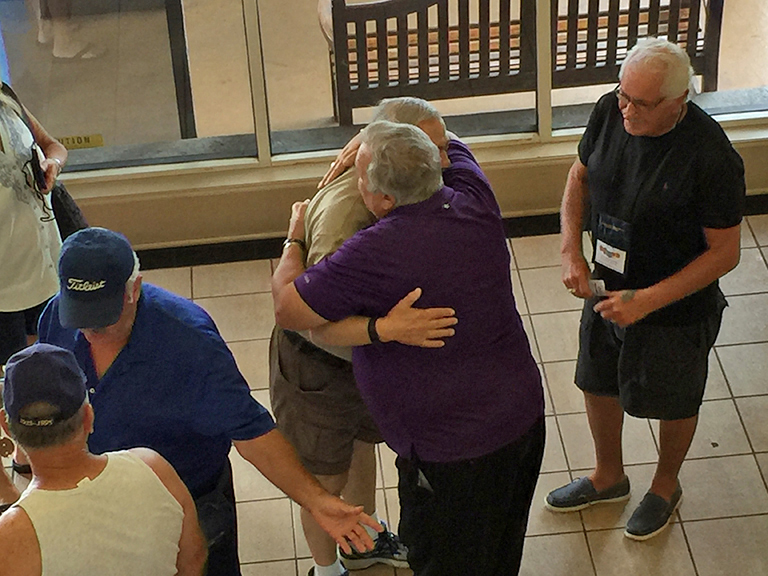 What it’s all about

Officer McIntyre was present at this Transit Police reunion. Since her time in the tunnel she went through divorce with two children. But she persevered once again and raised those kids to become beautiful adults. She “Transits” on in life as an optimistic divorcee. 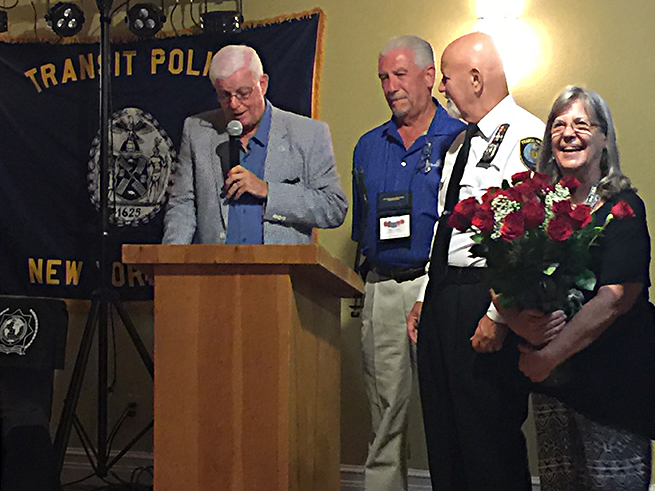 Christine McIntyre will now be on the new reunion committee freshly captained by past Transit Police PBA president Bill McKechnie. Her task is to vet new venues for future reunions. She also avidly participates in support groups for other cops who…faced down madness. 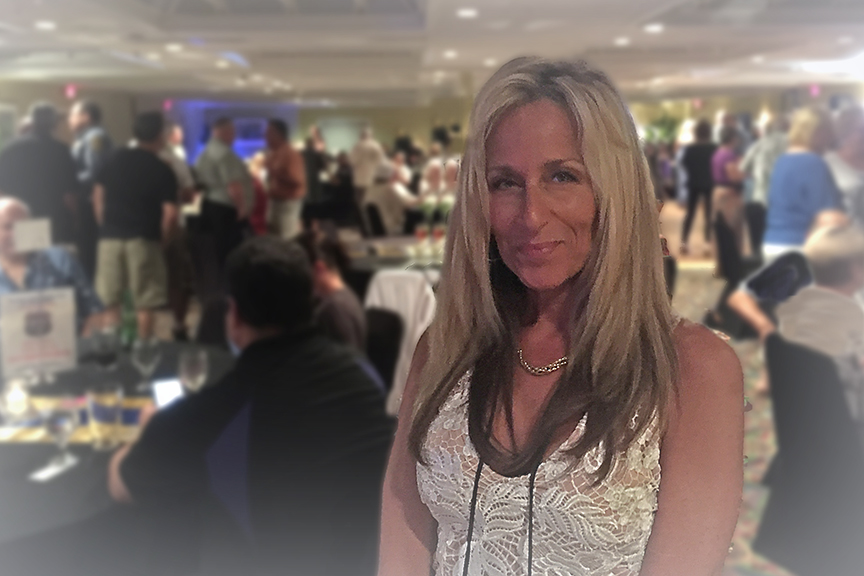 We were the few…who served for you.