Shedding a little light on…”this realm of flesh and bone.”

“Only a life lived for others is a life worthwhile.” Albert Einstein from “Einstein and the Poet” by William Hermanns

I think Albert Einstein saw parallels in science and human compassion, his greatest strength after all was his intuitive nature: “Indeed, it is not intellect, but intuition which advances humanity. Intuition tells man his purpose in this life.”

Many of us believe our purpose in life is to to earn a heavenly afterlife. Faith is powerful and sustaining, but we still have this mortal plane, this realm of flesh and bone, this rollercoaster of hope and despair right in front of us. And maybe if more of us do live a life for others it can indeed be “a life worthwhile.”

I think most of us live at least part of our lives in service to others. But many don’t think it really matters that much in the big picture. But it does.

I’m sure you all saw the Big Picture from space, the curvature of our Earth.

That curvature, that arc, is present in every body of water on the planet, from the largest oceans to the tiniest lakes. Did you know that, mathematically the curvature of the Earth is also present…in a cup of coffee?

What of the inhabitants of Earth? Can individuals, making a difference through service, kindness, affect the arc of humankind just as physics affects the arc of  Earth’s surface?  Does every tiny cup of human kindness make  “a life lived for others…a life worthwhile.” 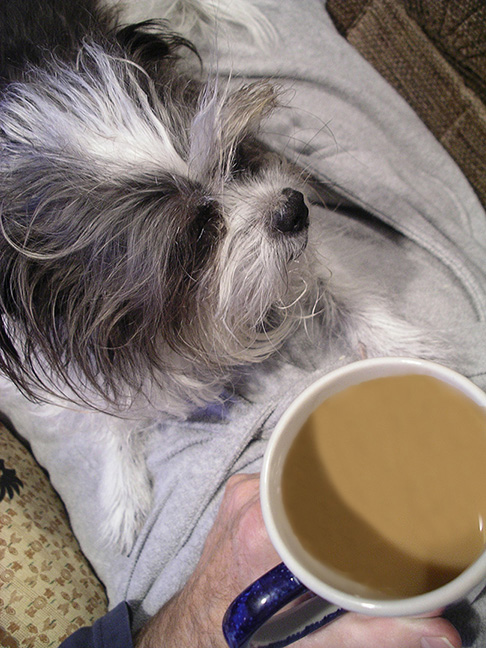 Our pooch, Bailey and my curved cuppa coffee

I was touched in church when I was very small. Not in the sordid sense that we’ve heard way too much about. I missed the 9:00 a.m. Mass, the Mass designated for us elementary school kids. My mom sent me off to an adult Mass at 10:15 a.m…alone. It was a six block walk but moms let kids commit to such adventures back then.

My first Communion, about the age of my “adventure” with kindness

I was maybe seven or eight but as I stood in the pew among the adults I was a tiny fir amongst towering redwoods. I knelt and stood when appropriate, (we did a lot of kneeling-standing-sitting aerobics at Catholic Masses). I’m sure I kept my palms and fingers steepled as they rested on the pew in front of me, and when the time came, I put my nickel in the collection basket.

At the end of the Mass one of the redwoods, a lady next to me said, “You’re here all alone?” I said, “Yes.” She reached into her pocketbook and said, “You did such a good job, please take this.” then poured a handful of pennies into my palms as her smiling husband looked on. Wow! I was astonished.

When I told my mom, choirs of angels sang for her, I’m sure, as a smile as wide as a Buick’s grill spread across her face.

Why on Earth should I remember such a casual kindness…some seventy years later? And why would you care?

Because it’s an example a difference being made, a kindness. They happen that way, these kindness moments, they’re just part of our natural lives. But that woman, in that simple act, was part of shaping a young and formative mind.

Nature plays a part in our ultimate form, but I’m convinced nurture has a profound effect on individuals and an exponential effect humankind. I’ve had similar shaping experiences throughout my life, so have you.

These events, the experiences I’ve had, the books I’ve read, the movies, the art I’ve been exposed to, all have shaped me in some small degree to form whom I eventually became.

I think we all can look back to High School, college maybe, the armed forces, to jobs we’ve held, and found ourselves next to people who have had some impact on us. So when their death is announced to us they are never really gone. They live on in you, sometimes just a bit, sometimes to great extent. 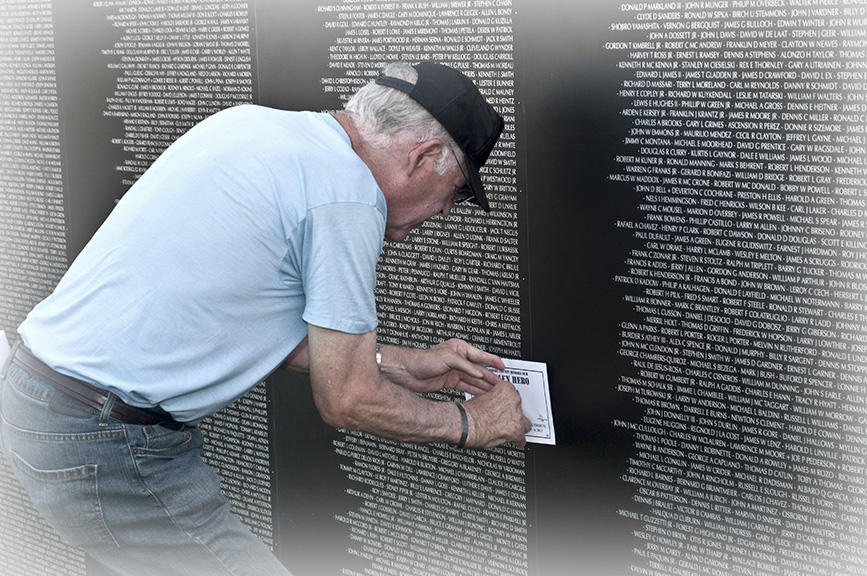 Tracing one who served. The Traveling Vietnam War Memorial

But they live on…in us, in every beat of our hearts. They live on in others. They’ve made a difference. We all live on in those with whom we’ve had contact…even contacts we’ve had with strangers.

Whatever our career, we can make a difference, we can affect the arc. I was a cop. I was a Marine. So I can only speak a bit about service there.

Cops get a lot of bad press these days but my Brother and Sister officers know that almost all of us have worked hard to make a positive difference in our communities, protecting all against bad actors, helping individuals, very often saving lives.

Most Officers take it seriously and feel genuine satisfaction in…making a difference. Sometimes it’s going an extra step. There is no provision in the Patrol Guide about any duty to express kindness. But kindness is beyond duty. Sometimes it’s an unexpected gentle word or act that people remember the rest of their lives. Often it’s indelibly written in the arc of humankind. 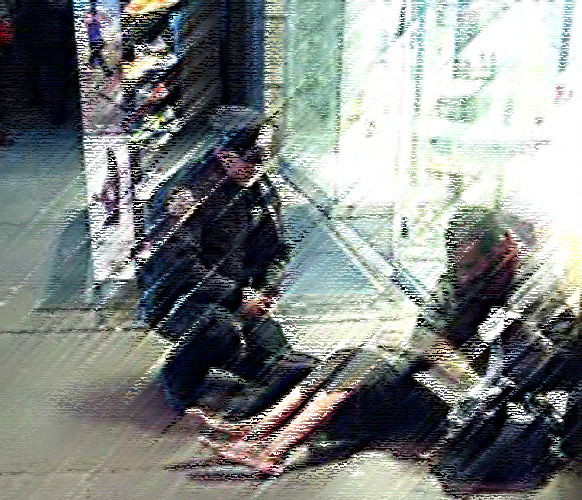 In an act of kindness NYC cop, Larry DePrimo buys shoes for a homeless man http://tinyurl.com/cop-kndns

And all the police shooting errors, all the bad press, all the iPhone videos, all the vicious chants, won’t change what individual positive differences policemen have made in the personal lives of so many.

But our deaths are really only the “fini” to what we’ve presented. They are the period at the end of the sentence of what we’ve expressed to humankind. So when we hear the bell tolling in sadness for those who have served us we need to know it as a salute…to a life well said.

Our military, the one percent of Americans who serve, too often don’t come home again. But they fought for you and me in that service. They fought to protect their Brothers and Sisters serving alongside them. They fought so we at home, when we choose to do so, may serve each other, show kindness to each other, make a difference in the arc. 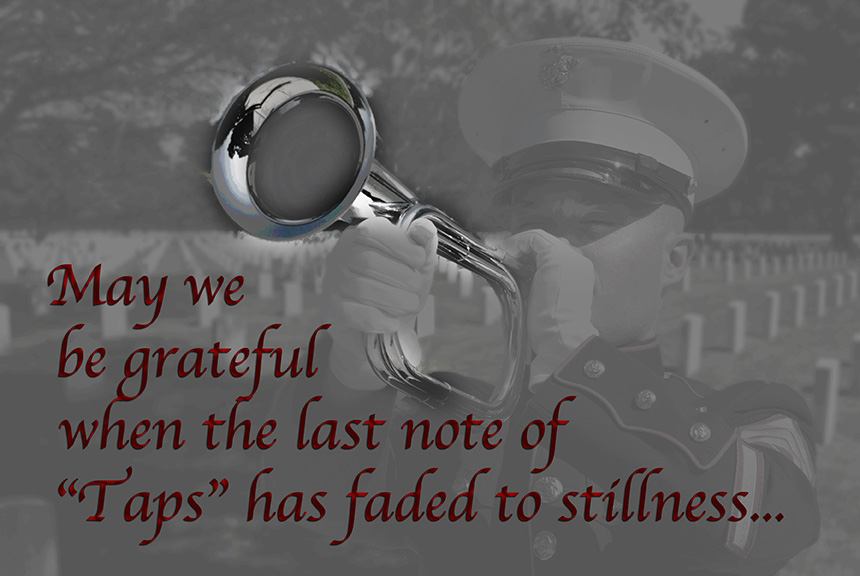 Taps. From my photo-video, “At the Hour of our Death”:http://tinyurl.com/hour-ofdeath

These expressions, the minutiae of life, are alway there and always count in our cup of human kindness.

Albert Einstein: “If we want to improve the world we cannot do it with scientific knowledge but with ideals. Confucius, Buddha, Jesus and Gandhi have done more for humanity than science has done. We must begin with the heart of man—with his conscience—and the values of conscience can only be manifested by selfless service to mankind.”

The evening news tells us we live in violent times. Some of you may find this hard to believe but human violence has been steadily declining over the ages. Sure, in certain places violence is the routine, even “holy”. But throughout our planet, attitudes toward violence have declined steadily over the millennia…and so has violence.

When we serve each other, when we foster kindness, we change attitudes. And attitudes curve the arc: “The decline in violent behavior has been paralleled by a decline in attitudes that tolerate or glorify violence, and often the attitudes are in the lead.” Steven Pinker, “The Better Angels of our Nature: Why violence has declined.”

That redwood-tall woman at Mass with me is long gone. But some seventy years later her kindness, her pouring love into a tykes hands lives on, right on this computer screen before you. And maybe now…in one or two of you.

When we serve, when we are kind, we make a difference. Were our hearts to suddenly stop, our brain waves cease, our eyes close forever to the majesty of life on Earth, we will have expressed ourselves. We will live on…just a bit…in the lives of others.